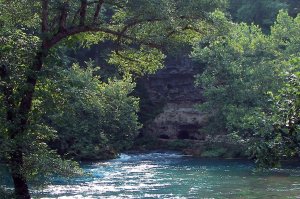 Adam found Billy in the kitchen, working on a dripping faucet.

“Give me five minutes to finish this up,” he said, “but off-hand, I have no idea what you are talking about.”

Adam walked around the graveyard and took a couple of deep breaths trying to settle down. He left Angela in the kitchen; she had started talking with the women who were working there. When Billy showed up, Adam asked him what was going on with the grave stones.

“Nothing. Why? What are you seeing?”  He actually was concerned: his home depended on things going right.

“Some are facing the opposite way they used to.”

There was a stunned silence.

“You sure you remember right?”

“Let’s take a look, then,” Billy said. “I haven’t seen anything unusual, but I see them so often maybe I’m just not noticing something.”

The two of them did a quick survey. Sure enough, some of the stones were ‘backwards’ from what they originally were.

“See?”said Adam. “The moss on this one is on the south side—it should be on the other side, facing north. The sunlight is killing it.”

Billy scratched his head, puzzled. “Adam, I have no idea what’s going on here. It ain’t nothing I done to them. I got no time for it. I’ll say this: they sure look better! All straight and in a row. Maybe it’d be good to let it go!”

“I don’t see no harm in it. But in any case, it’s none of my doing, if that’s what you wanted to know. I don’t know who’s doing it, either, but it looks a helluva lot better where it got done.” He paused, tried to stare Adam down.

Adam spit on the ground.

“Oh?” Billy took a step toward Adam, then reconsidered as an ancient-looking church lady shuffled out of the kitchen onto the porch.

“Well, thanks for pointing this out to me, sir. I’ll be sure to look into it.” He turned on his heel and walked back onto the porch and into the kitchen. Angela was just coming out and he paused, blocking her way. He gave her his best smile before stepping out of her way.

“It was an ambush,” she said when she got to Adam. “It started out recipes but turned into a grilling about you and me.”

Adam was only half listening.