The Christmas Gift from The Roommate We Kicked Out 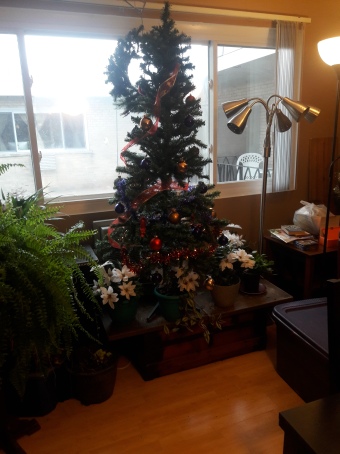 The Christmas Tree and Wreath the Roommate Left Us

Last summer, we took in a guy who needed a place. Maybe you’ve done this. He’d moved to the big city with high hopes and a friend who wanted him to move in. That lasted a month. He found another place, house-sitting but it also came to an end and he didn’t have a place to go or money to get one. So we invited him to stay with us, temporary, as a paying guest. He agreed and was grateful for the chance.

To shorten a long, sad story, he lost the job due to non-attendance, refused to pay rent or leave. He called the cops on us three times for violating his right to stay without paying. Yeah. And much, much more. But then his mother died and he left for the funeral. We had already rented out “his” room to a paying roommate and gave him half the living room “temporarily”. His belongings filled his half of the living room waist-high. They also filled the apartment storage room to the ceiling. And some were still at his old friend’s place.

He came back for one pickup truck load and a month after that texted that he would not likely be back for anything else: he was moving again. We acknowledged, but his stuff in the storage room we left alone, just in case. In truth, we didn’t know what was in there, beyond it being very full of what looked like camping gear and some Rubbermaid tubs.

So now its eight months later, it’s December and we are seriously looking at moving to a cheaper apartment. With Christmas imminent, we decided no tree for Christmas. Of the three of us, two don’t normally ‘do Christmas’ anyway.  Call me a kid, but to make a year complete, I need Christmas! With the move imminent, however, I figured my inner kid would survive if I miss putting up a tree one year. And truth was, my own Christmas stuff is in storage in another state anyway. Yeah. And I wasn’t going to retrieve it just before a move. 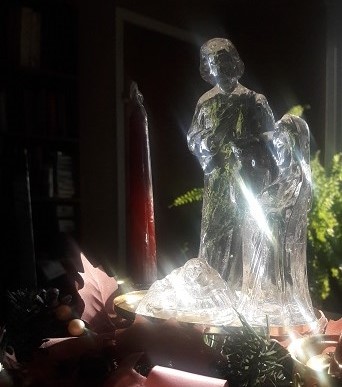 Glass Manger Scene From the Roommate

So rather than all the Christmas hoopla, we would keep busy with moving preparations. We went to empty the storage room. The plan was to donate or toss whatever was in there, and pack and stage some of our own stuff for the move. Well, guess what we found? Yes! All the Christmas decorations, and a small artificial tree that belonged to the troublesome roommate. Instant Christmas! Tree, decorations, and enough left over to donate to a favorite charity.

Sounds a little like the Christmas story that this holiday began with: an unplanned move that ends up a Christmas Blessing.

Author, speaker, ex-Navy and ex-preacher and ex-several other things. Grew up in the wilderness of Madison County, New York State. Officially retired, currently residing near Dallas TX but have lived on all four coasts and Hawaii. Maybe someday I'll retire back to New York. But not yet.
View all posts by Gordon DeLand →
This entry was posted in daily life, Uncategorized. Bookmark the permalink.